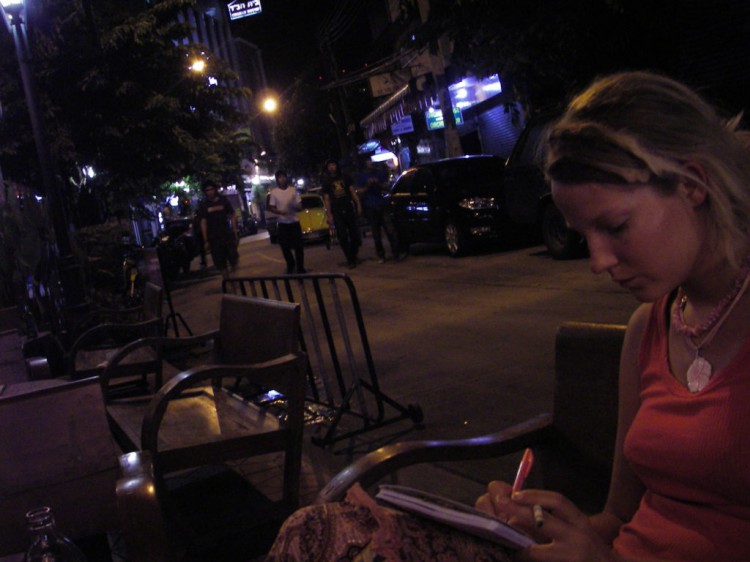 I’m sitting at an Internetcafé downtown in colourful Bangkok. It is damn hot here, even though the sun isn’t shining. Sweat drips.

After touching asian ground for the first time we qued up at border control. D’oh! It’s what you go through again and again: No matter which line you are in, the other one is always faster. Same applies to the line you just left which speeds up the moment you prefered waiting at the other end…

We hopped on a bus to the centre of town. It took us 1,5hrs. Roundabouts with six lanes. Stuck. Getting used to our backpacks (12kg, that’s all we have. Deliberating!) we were marching the streets in which many adventures have begun. You get the impression when you’re watching movies like „The Beach“.

We found a place to stay. It had no window. But a private bathroom. Which was completely flooded when we washed off the remaining traces of home. 400 Baht/night. We sticked to simplicity when we chose what to eat.

We both had no appetite. Jetlagged? Homesick? Probably both. Paired with Wanderlust. But we’re no daredevils yet.

We hit the streets again at night. They were filled with all the stuff you can think of. It’s what dreams are made of. Or nightmares.

Deepfried grasshoppers. I really want to try these beasts sometime. Even though I am a vegetarian. The ugly exception to the rule. Still no appetite at the moment though.

First impression? This place is crazy! So different to anything I’ve ever seen. We’re both blown away by it all and talked about this at a random bar. We also shared some silence there as we were both taking notes in our traveldiaries.

Then we settled for our first night on the go. Getting ready for bed we found out that we actually left our Travelguide back home. Lonelyplanet home alone. Pretty sure we’ll come across many faces giving us tips on where to go. Oh, and I forgot to take a towel, too. I took the blankie and the pillow from the plane, though. I’m positive this will come in handy.

The aircon was on. Cooling us down until we were freezing. We turned it off and went to sleep. I woke up in the middle of the night. „Where am I? And what the hell am I doing here?“ I was just lying there. No light. Just darkness. I couldn’t see a thing. Quite metaphoric to what was ahead.

Who knows what we’re upto in the next couple of months? Where is this taking us except somehow from Bangkok to Singapore, from Bali to Australia, across New Zealand and off to South America and the U.S.of A.?

I got homesick. My friend was awake too. We considered jumping on a plane back home. Then we decided to focus on the moment. Four weeks on holiday in Thailand. We shall think further once we cross another border. Let’s see how we feel then. Yes. It’s all about perspective. I felt a lot better and went back to sleep.