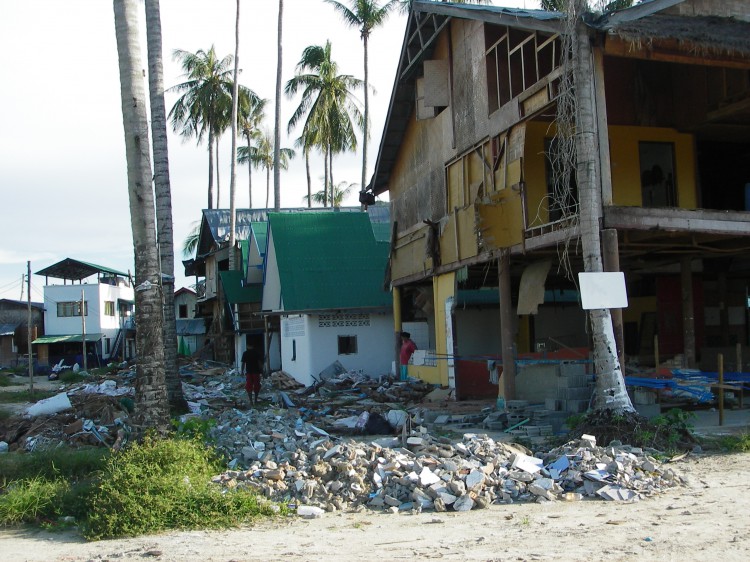 The Tsunami (Dec 2004) had hit the shores of Koh Phi Phi only eight months before. We spent our last days in Thailand on an island that had turned a well deserved vacation or daily routine into a mere nightmare for hundreds of people.  We could vividly remember the widespread images available in common used media. Boats on what seemed as dry land, the water ebbing away before overflooding the island in a tidal wave. The pictures of what was left when the water disappeared again. Mud, rubble and a blow of cruel fate.

I had this catastrophe in mind when I was walking the streets. Some areas were built up again to keep the tourists coming. Things had to move on. Still there was dejection in the air. Breathing in seemed harder here compared to the places we have visited before.

The water in the pipes was still salty because the wells had been washed over by the sea. The further you went from the promenade the more inclined you were to find ruins instead of places to go to.

These were moments to remember.

But more than the “shit, this could’ve been me on a day like this”. The death-facing manner, which teaches you to carpe the fucking diem, it was the sympathy deriving from this that really got me.

To imagine the tragic stories gravitating around this hurtful event. It dragged me underground. What to do? Besides trying to be there with an open heart…?

Well we actually found a place where our hands were needed and volunteered. Dug up some sand and sawdust and filled it in bags. Whatever. Just a couple of hours. It was important for us to acknowledge what happened and to help somehow. To show some respect I guess. To not just pass by…

We had banana pancakes with chocolate sauce to cheer us up. And bought loads of shit.

A little later I got a new tattoo. Spontaneous idea. Way to go to get something permanent. Not. Anyway… I was curious. This was the ‘traditional’ way of getting a tattoo. The place seemed kinda clean. So minutes later some random guy was stitching ink onto the inside of my bottom lip with a couple of needles tied to a bamboo stick. It hurt. So it felt good. The meta-pain I experienced before now hit reality. I enjoyed this in a weird way. It was a quick fix.

The needles were sterile enough I suppose since I haven’t gotten ill from this until today… And the tattoo? At least the foolish 20 year old version of myself chose a hidden place to have it done to. So I do forget about it most times. Until the dentists wonders if I had an amalgam filling. Well no. And I didn’t chew on a biro either. I just needed to feel some real pain that day…

I hurt myself today

To see if I still feel

I focus on the pain

The only thing that’s real

The needle tears a hole

Try to kill it all away

But I remember everything