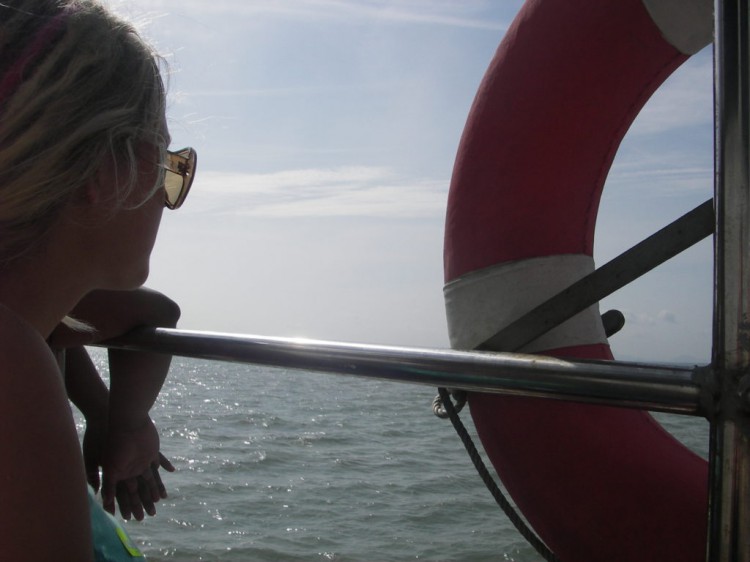 I’m in a cabin like kinda phonebooth with a fan and a PC.  Let’s begin the holiday with a sunburn I got on the boat. Sunscreen is defo more important than shoes…

We finally left Bangmotherfuckingkok. But before we travelled further we strolled around Khao San Road once more and a fortune-teller ripped me off. My friend got really mad when she saw me following him to a remote alleyway. Yes, I know, it’s not magic. He’s got dirty tricks, guessing things I jotted down on paper. He said I would be back here in Asia by the end of the year. Wrong though- I’ll be in New Zealand my pre booked ticket says… Paid him too much. Got a talisman and a lesson for life: Learning to say “no (thanks)!”

We also visited the Floating Markets and went by boat up the canals. A rather meagre neighbourhood. Rotting huts on the river bank. Fishermen in rags. The downtown multi-storey buildings in the background are fading into the smog filled sky.

Our appetite returned at last and we had some sweet rice wrapped in a banana leaf with some fresh fruit and coconut water. By the look of the water we happily skipped the fish.

The train down south via Surat Thani left in the early evening. We snacked on litchi waiting for it to roll through the outskirts. Never in my life have I been confronted with this kind of poverty. So much waste and squalidness, many abandoned buildings and kids playing among it all.

When night fell the beds were installed. We shared a cabin with locals who could afford the sleeper.

I got up in the middle of the night and sat on the open compartment door. Well, actually there had been no door. I just sat on the stair that led into the darkness. My elbows were resting on my thighs. My mind wandered. I could merely guess the landscape flashing by. I watched the stars above and felt free. Had a wee before I went to bed and pissed on my foot. Squatting over a hole in the ground and aiming on a moving train was too much of a challenge. Returned to the open “door” waiting for it to dry.

We arrived somewhere twelve hours later. We were tired, longed for a shower, would’ve loved to brush teeth (or rinse my feet the least) but we needed to find the bus that would wake us to the ferry.Once on it we zonked out and awoke at the port. The air tasted a lot saltier and another couple of hours later we finally reached Koh Samui.

Excitement arouse when we searched in a giant pile of backpacks for our stuff. We found it and they found us: a horde of officious locals who advertised their accommodation- so much for the tuk-tuk-travel-agent’s advise. Glad we didn’t listen. We had to reject many offers until a little shuttle service took us to the beach in Lamai where we were heading for.

We booked a little hut on-site including our private bath and toilet. Sounds fancier than it was: basically a garden hose hooked to a wooden fence and a toilet bowl with a big tub of water and a bucket next to it.

It’s the simple life we chose! Said “Hi” to our neighbours and washed my feet.