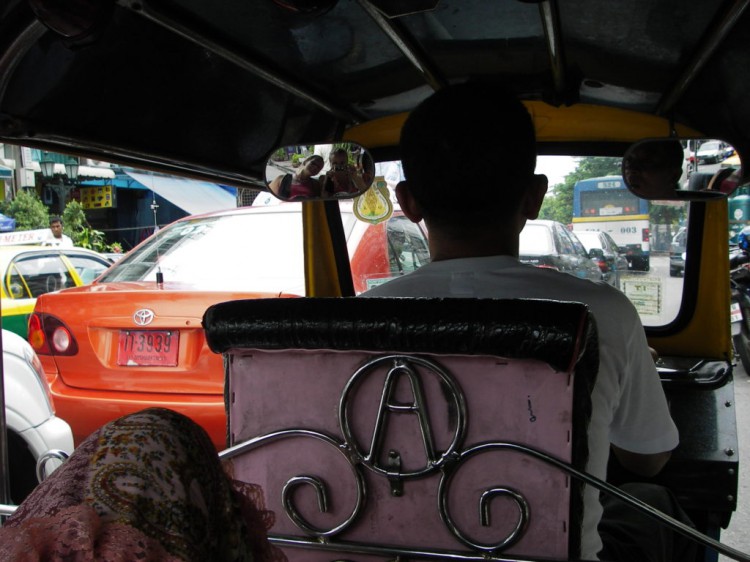 So this is it, the first „Guten Morgen“. Let’s yawn away the fear that crept up my back last night. Things do look differently the next morning.

We had yoghurt for breakfast. It said something with cereals on the wrapping- little did we expect what we found in it: Hello beans and sweet corn! Kinda weird first thing in the morning. We had some soft rolls with it and sugary sesame bars. You can tell we still weren’t hungry.

It was time for a day trip! We took a tour in a rickety bus. It drove us to some ruins and temples and statues.

The ride alone was worth it. I was ready to die at the foot of some sleeping Buddha when we got there. I was aware enough to not rest on his foot though. Others weren’t. The tour guide immediately asked the higher spirit for forgiveness…

So sightseeing we were. I could not believe my eyes when I saw young men who appeared to be monks chatting away on a cell phone and flicking cigarette butts to the ground. A lasting image to this very day! I kinda expected a more romantic and ascetic version of real life monkhood. But yeah, why not.

Of course we also tapped straight into our first tourist-trap: Innocent as we were we happily hopped on a TukTuk (yep, pretty much the noise it makes, too) and giggled away high on exhaust fumes until the vehicle jerked to a halt. We were led through a door and entered what looked like a travel agency. They wanted to sell us a trip all over Thailand for 900 €. A bargain, they assured us. A must have he advised us, too. Because without it we would surely not being able to find a place to stay. We would probably die, too, as unorganised as we were.

Dramatic arguments up his ass. We took the chance as he paused for a deep breath, hit the streets and ran a few blocks.

We met “Udo”, father of three and that typical guy who loves a holiday in Thailand. He shouted us an orange juice and we randomly met him again later at night. He told us the secrets of “Ladyboys” (it’s a penis) and said there’s no need to pass the ice cubes in touristy areas. Don’t know mate, better to be safe than sorry, eh?! The longer we talked to him however, the weirder he seemed. Still nice though, not intrusively in any way.

But we began to wonder about his wife and kids after a while. And he kinda looked like a man you associate with choosing the woman for life from a catalogue. We might have wronged him there, but we thanked him for the juice and left.

Chaos! Not only on the streets but also within me. It’s overwhelming. Not sure where to store all the impressions. My head is buzzing. Again it took the quiet night until it hit me once again:

I am here. On this trip.

Accompanied by a dear friend. Taking steps in our very own and self-determined kind of life. We chose this.

No obligations. No school, no parents, no stress, no sorrows. Talking about stress: Damn flickering neon lights. Scramble on the roads. Dubious people. And the sorrows?

Oh look, you can buy a doctoctor’s degree here!

We purchased tickets down south. Train, bus, ferry. Hello sea, beach, horizon and fresh air! So ready for you.

Bangkok is crazy. We needed to get outta here. Off to some quieter place. You’d think. It’s full-moon soon…

I’m moving I’m coming – Can you hear, what I hear? It’s calling you my dear – Out of reach (Take me to my beach)! I can hear it calling you. I’m coming not drowning, Swimming closer to you (All Saints – Pure Shores)