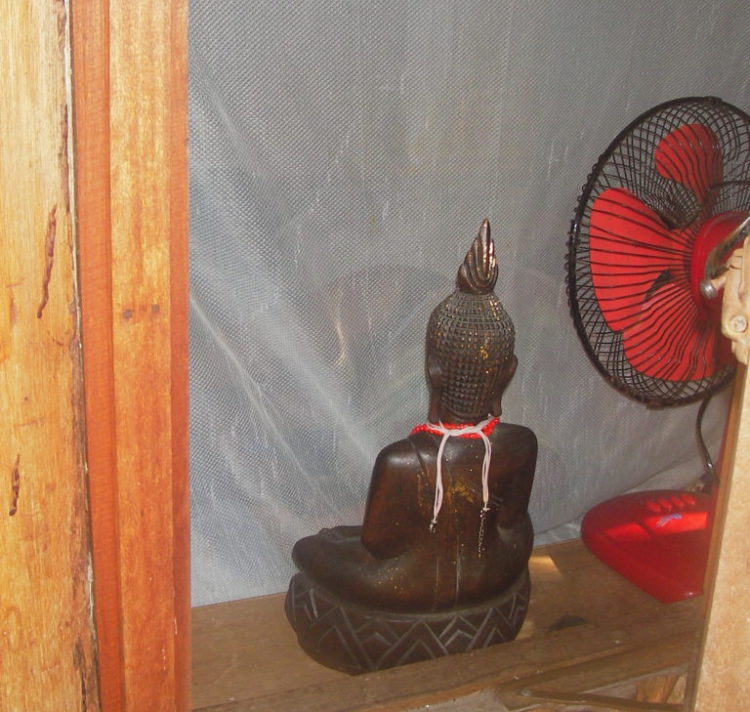 Different internet café but just as cold… The Philistine within noticed: Pay some respect to Buddha and treat the sculpture nicely like taking it out of the plastic bag and stuff… Jeeeez!

Koh Tao is nice after all. However, we came to this conclusion after we booked tickets to get off this silly as happy couples’ island without reception ASAP. Yeah, we just paid for another trip by boat towards Krabi when we met some fellow Dschörmans. We are everywhere, aren’t we?

“So you are off to Krabi next?” they asked. “It’s Schietwetter [a common used term in Hamburg, Germany, describing these dull and dreary days] over there. You should change plans! We just left Koh Panghan, you really gotta go there. Up north is a lovely place called “Bottle Beach”. Chilled People, nice huts. Think about it!”

Koh Panghan is a rather big island on the east coast. It’s where most routes by boat end or begin. One of the places you transfer to get back to the mainland. So it was defo en route. We happily took this advice and saved it for later by jotting it down in our diaries. The 2005-version of pinterest…

Anyways. Something badgered me.

If you are away from home long enough you begin to recognise people you know in strangers. Wading through anonymous masses there’s this moment of “hey, I know you!” but then you realise you just mistook someone’s face for somebody else’s… It happened to me quite often when I lived in Wellington, New Zealand.

So I thought about this face over and over again. I was pretty sure I’ve seen it before and talking about “Schietwetter” he must have been from Hamburg. I knew this guy. But I couldn’t recall who he was. So maybe he just looked like someone I randomly met.

We had a plan. Getting away from this place fast. We had tickets. But now we knew we were heading towards rain. Eeeeew. We weren’t too convinced. In fact we were indecisive. Bottle Beach maybe? What a see-saw. We took a walk.

When we strolled down the beach we saw two girls we knew were German as well, so we headed towards them to chat. And look who we found, too: the other two Germans we met earlier on. The face that kept me thinking. They were playing cards together so we joined them, small talking.

Meeting new people while travelling, the “roots” ain’t much of interest. It’s the “where are you going to” that fascinates or the “where have you been to so far” but who cares about where or what you originally left?!

But in this case there was sleuthing to do. So Hamburg it was. Poppenbüttel. Really?! I knew you seemed familiar. Which school? Hmmmm. Name a few people you know… Aaaaah! The penny dropped. There was this party. And there was this one guy I was roughly introduced to who was also planning to go to Thailand. So it’s you! Ha! It’s a small world after all…

Regarding our plans he said we were not to leave this island before we hadn’t explored the underwater world. This had not been an advice for skin-diving. He commanded us to go snorkelling before heading on. So the plan for tomorrow changed for good. Goggles and flippers instead of packing our bags. Screw the tickets, hello fishies!

After many rounds of cards and stories told, I mentioned the wooden Buddha sculpture. Wrapped in newspaper, packed in a plastic bag, stored somewhere between the dirty and clean laundry in my backpack. Apparently this explained everything.

“Make sure he’s always above your heads. He’ll watch over you and be of better luck if you pay him a bit more of respect… And did you know you are actually not allowed to export Buddha-sculptures? You gotta smuggle it out if you want to keep it!”

We knew what we had to do next: Before heading to bed we freed our wooden friend. We graced him with some flowers and the creepy talisman I got in Bangkok. We placed him on the window sill. We made peace. With us. With Koh Tao. Never mind the tickets. They were less than 20 €. We dreamed about the next day in paradise and were pretty sure it was all going to be worth it…

And all the roads we have to walk are winding,
And all the lights that lead us there are blinding
There are many things that I would like to say to you
But I don’t know how
Because maybe
You’re gonna be the one that saves me
And after all
You’re my wonderwall (Wonderwall – Oasis)