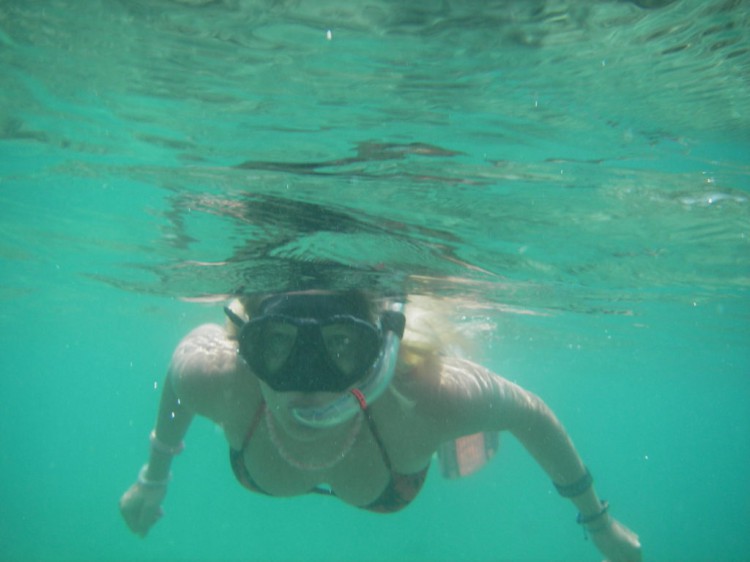 “Life is the bubbles under the sea…” Yeah, just as convincing this was to Arielle to stick to her life underwater, it is as hard to get me in there first hand.

I’m not a fan of the open sea. I mean I love sitting at it, but I don’t like swimming in it. And this is my own fault.

I must have been five or six years old, it was late at night and I was in my mum’s bed. Pretended to be asleep while she was watching “Jaws”. So I was watching too. Big mistake! If I had only known the impact it was going to have on my life… Even today! . In 2016 I freaked out in a bloody pool on Fuerteventura when I swam by myself at dusk. Like I am a mother of two. A grown up. Kind of…

Ever since that stupid idea to peek through the slit of my eyelid, the score haunts me when I am supposed to flounder about in the water.

Back then I wasn’t able to take a bath for weeks. Ok, by now I know a shark doesn’t fit through the plug hole of a bathtub. So no unexpected visitors while rinsing my hair. And it sounds reasonable that there are no sharks in a swimming lake. I get it. But man, especially when I can’t see what’s beneath, this very Tuba sound get’s louder and louder in my head. My heart begins to race. Panic attacks instead of the great white.

Driven by fear I simply avoid deep or turbid water. I do not swim in the ocean. I swash and splash in knee deep water. Shallow enough for the shark to get stuck when trying to eat me up.

In case you still don’t get the idea of how frightening open or deep water is to me, try free floating with that Jaws-Soundtrack turned up loud (on your waterproof headphones) and picture the scene of the shark approaching as seen in the movie. The camera perspective changes from halfway out of the water to below the surface.

And then there is blood, giant teeth and torn flesh everywhere.

Yeah. Just think of that while floating free.

So we decided to go snorkelling. I felt like this: Edvard Munch’s “Skrik”… ?

We looked ridiculous with goggles on. I focused on this. The cheerful giggles were louder than the tuba’s tune in my head. Kinda hard to smile with a snorkel stuck between your teeth though.

I took a dip. I was amazed how fast I could swim with fins on… And then I realized how far away from the beach I had already gone. And how friggin’ deep the water was. Fuck! Errrrrr… Help?!

Argh! I was about to turn around and head back to safer shores when I told myself to be brave and just do it.

My heart was in my mouth and so was the snorkel. Head underwater. I was holding my breath. My eyes were closed tightly. I totally forgot about the gear I had on. I was gasping for air. My breathing went shallow and I kinda panicked. But then I opened my eyes. I calmed down and let a whole new world sink in. It was beautiful!

When I swim in deep pools (1,80m and deeper…) I always get this vertigo kinda feeling only reverse effect. Like a fear of depths. But I was too busy enjoying the view and let Thailand’s sun shine on my bottom. This was awesome. I had clear sight and the bottom of the ocean was about 30m below. I have never seen anything likely.

Pretty fishes were suddenly all around me. Normally I would have started screaming if anything would touch my skin underwater- be it kelp or fish. But man, I was totally fine with them swimming all around me. Right there in the open water. They were big, small, quick, colourful, striped, this and that. I saw turtles, sea anemone, crabs and sea cucumber- the turd among the molluscs. Simply stunning.

Just like bait on a fishing-rod I was hooked. So we booked a big skin-dive trip by boat for the next day…  Am I giving away too much when I tell you that THE tune returned?! But first of all enjoy some of that underwater love. My camera only had 5 MP but it was waterproof! How cool is that?!