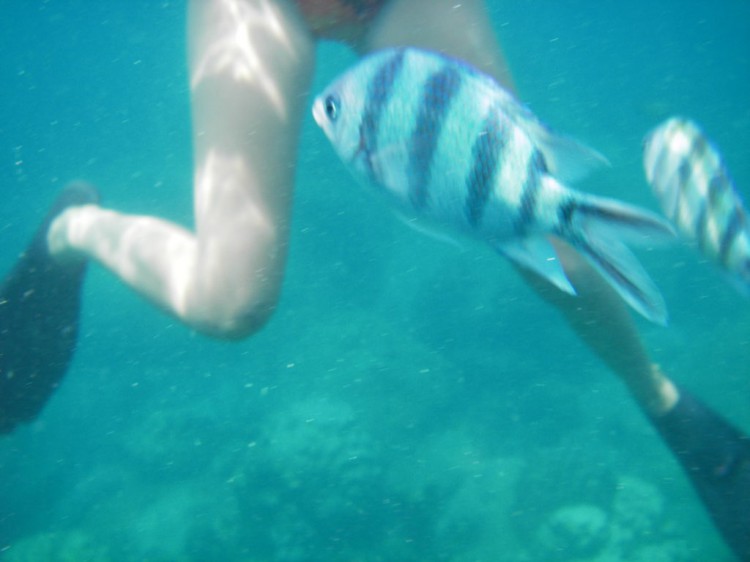 Still afloat on my big UE (as in overseas experience, just underwater) I began to feel nauseous once we were off for bed. I was looking for appropiate places to vomit because a giant cockroach-bouncer kept me away from the toilet. I was going back to bed and getting up again every few minutes because I was queasy. My friend suggested to take the bin and relax in the hammock. Great idea!

Anways. I was fine in the end. False alarm. Many years later I learned at my behaviour therapy about this vicious circle – how the fear of vomiting actually causes similar symptoms so it just gets worse…

The next morning I sticked to a slice of toast, peanutbutter and banana. Less in, less out, I thought. A little later we boarded the boat with 10 random people and went up the coast. The anchor was dropped at different (same same) spots to snorkel and after a few minutes we were called back and counted one by one. (RE: Stuff that movies are made of…)

To make sure enough fishes would be encountered, they threw bait overboard. PLEASE! No big, bloody, chunky bits!

Blame it on the sea condition or my own state of mind. I was not going to dive into that water again and actually preferred watching the snorklers watching the fishes. Yeah, it is like that: When I feel sick I cannot be brave. I can only crouch down, feel small and wait for it to be over soon… So that’s what I did boating. Whoop!

But I’m a creep, I’m a weirdo.
What the hell am I doing here?
I don’t belong here. (Creep – Radiohead)